The last time we spoke, I had said I would write back to update you on the last couple of hospital stays, latest medical related news and now I have heard back from Harold’s Cross RMDU and they want to book me in on the 8th of February so now that is also something to prepare for!

When admitted last in October, I was in for severe pain in the base of my skull and neck. With this pain I was having severe headaches that seem to come on worse just before a seizure kicked in, of which I was having many episodes prior to being admitted to hospital.

An ambulance was called because I had a strong seizure that lasted more than 10mins and over 30mins by the time the ambulance crew arrived. Though Keith told them I was allergic to Benzos, they said: “its the only way to stop her seizure now so we will give her some and watch her closely until the hospital anyway”

In the A&E I was immediately taken into Resus where they got me under control, monitored me for a while then placed me in a corridor again in the main A&E area. I wasn’t there for long as I very briefly remember Keith arriving to talk to me then apparently I went into another big seizure where I was rushed back into Resus again but this time I was kept in there for longer. 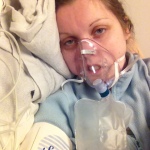 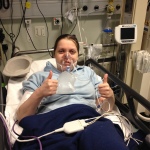 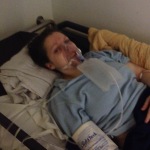 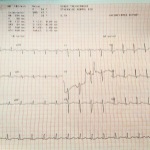 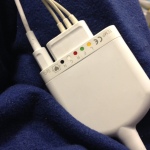 They put me on a phenytoin infusion to stop the Status Epilepticus  (a seizure that lasts too long) but of course I am allergic to these medicines so I had a bad reaction to the infusion at the IV site and my arm swelled up a huge amount, my BP dropped dramatically and I started presenting with Cardiac arrhythmia’s and it had to be stopped!

Once things settled I was admitted to a ward and eventually seen by a new doctor, A Cardiologist who said he would take over my care once I explained in detail that too many consultants are part of my medical set up that there is no communication between any of them. He was completely unaware of my situation himself at that time but once he realised I had in fact 3 very large old medical files (He was working off a new one that was put together only in the last 6 months and has none of my long history in it)  he ordered the old files to his office so he would read over them in detail and he said he wanted to be my head consultant, if I would have him, so that he could be the ‘go between’ amongst all the consultants! I said that would be great, but I have yet to meet him outside of this admission, I have an outpatients appointment with him on the 22nd of Feb so I will be eager to see how he wants to handle my care from then on. When inside I was seen by my usual Prof. Pain Specialist and he gave me Occipital Nerve blocks to help with the pain in the base of my skull and the severe headaches that go with it. These nerve blocks were a huge help numbing the pain and as a result there are less seizures with the less pain too.

Then over the first week of December I was admitted to hospital again. This time for something completely different… I couldn’t pee, I know, I know, not pleasant to talk about but look, this is the sexy life I lead!!

So once I explained to my doctor what was happening over the phone, Low body temperature and feeling very unwell the week prior, then all of a sudden, total urine retention,  he said get straight into A&E, apparently not being able to pee is serious, I hadn’t even realised so in I went and actually got seen straight away! A catheter went in, lots of questions asked to see if we could get an answer for it and all that could be found initially was it could possibly be the combination of medication I am on or the Gallbladder related severe pain and slow gut motility may have something all to do with this, we wouldn’t know until I was admitted and lots of tests had been done.

After a week of many scans, tests and some invasive procedures, I was put on what is known as Intermittent self catheterisation  for Urine retention because of Bladder and Kidney dysfunction. I was given a lil goody bag full of things to use for it (See below, I’m all girly about the bag, innit pretty?!!)  and I have to do this daily at home until I get called back by Urology to do more bladder and kidney function tests to see if I will continue this method or possibly be given a procedure to place a permanent catheter (I would really rather not have that, I don’t mind this method at all now that I am used to it!) 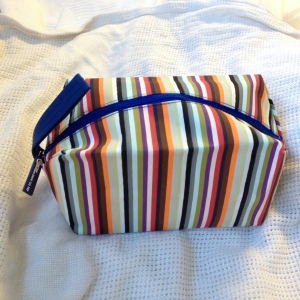 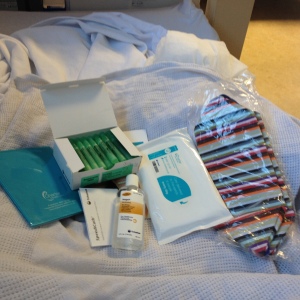 My pain specialist prof. came to see me because of the Gallbladder pain I was in too and though I had been given ‘anti spasmodic’ pain killers as is recommended to help treat the Gallbladder pain, they also put me on Morphine to take very regularly at home on top of the anti spasmodic pain meds, daily, to cover all the different pain I am under on a very regular basis. I don’t like being on Morphine at all, it completely messes with you sometimes but it no doubt helps the pain, it doesn’t even take it away but helps more than anything else I have been given.

While admitted in December, the Urology doctors also wanted my Gallbladder to be looked at again while I was in but my G.I. surgeon was on annual leave and I couldn’t meet him until the 5th of Jan. When I did, he was great as always, very thorough and not wanting to jump the gun with my treatment. He said to me,

“The easiest thing for the both of us would be for me to whip the bloody thing out, it would only take me about 40 minutes and you would probably be sorted. You do have sludge in the Gallbladder, but theres no guarantee that will ever turn into stones, it is dysfunctional but I don’t know with your EDS, could it cause more harm than good? given the possible healing issues and the fact that you have very slow gut motility and also losing weight, You may need that reservoir for fats going forward, even if it is faulty, so I don’t want to make too hasty a decision, even if it is causing you this pain.”

What he decided to do was take my mobile number, ordered my full documentation and files to his office so he could fully study my history before making his final decision on the matter and if he doesn’t decide to take it out, he said he would at least try to do something for the Gallbladder pain as it is arresting my life at the moment and I have lost a lot of weight since this all started in December 2014. He said he would ring me before that weekend and was true to his word and called me back on Friday the 8th but only to say they couldn’t find my old files! I suggested they may be with the new Cardio who wanted to take over my care while I was in, in October, as he wanted my files too, so I passed on the details and will wait a little further to hear back on that.

In the meantime, I have also heard back from Harold’s Cross RMDU. It had initially been suggested by Prof. Rodney Grahame in London that I get referred there as it could be great to try and get me out of the wheelchair full time but even though I was told in December 2014 that I had been referred up, I had heard nothing back all year. I only found out last week that they had my referral all along and that they wanted to admit me in May 2015 (Last year!) but due to a mixup I never got the appointment.

Mistakes can happen and it is sorted now, they want to admit me on the 8th of February for my first weeks trial where I will get intensive, Physiotherapy, Hydrotherapy, Occupational therapy and daily pain management techniques to help me live long term with my illness and hopefully get me more mobile, all the while being under constant nurses and a consultant rheumatologists supervision incase health things go south and they can refer me to a local hospital if that happens.

They will admit me for a week, Monday to friday and I will be sent home the weekend and brought back in again the following week if it is deemed necessary to continue the treatment. I have heard lots of reviews, many mixed but mostly positive, so I am interested to see how it will go for me, of course, I will report fully on how it goes and if I found it beneficial and suitable 🙂

Until then my next 2 appointments are on next Monday the 18th of Jan for a Pots Clinic check up and then on the 28th with the Prof. Pain Specialist who will give me some Greater Occipital Nerve Blocks (into the base of my skull/top of my neck) and Sacroiliac joint and hip Steroid injections.

It’s all go until Harold’s Cross kicks off and I hope to have a couple of blogposts up before I go up, so keep your eyes peeled and as always, THANK YOU so much for taking the time to read 🙂